Skip to content
How Did MLK Jr. Change America? 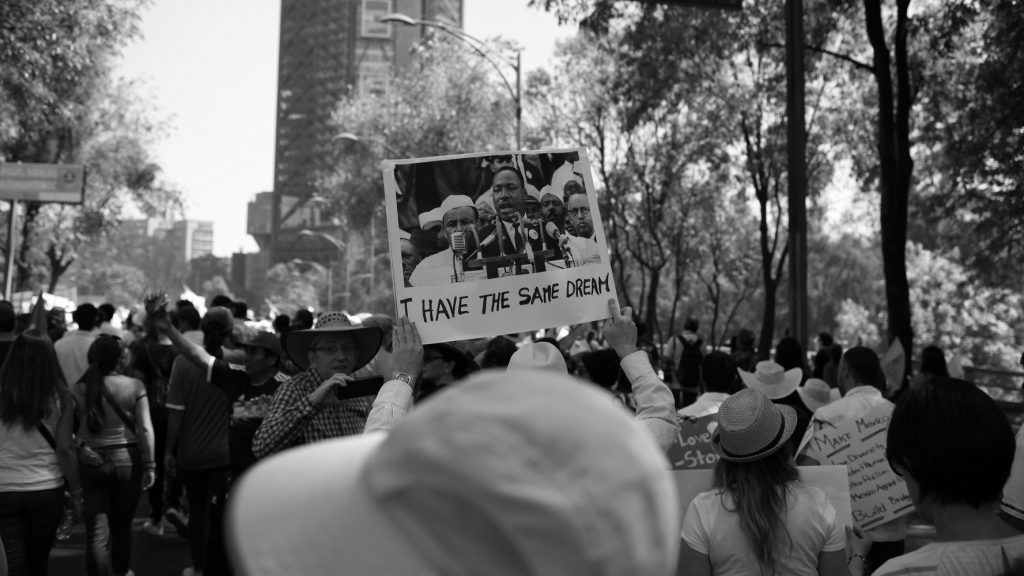 I’m sure you have heard of Martin Luther King Jr. because he is a big part of American history. I suggest taking time to read and listen to any recordings you can find about him, but first, I want to share what he’s meant to me. Growing up as a first generation African American woman I can say, I know who I am. My parents being from Uganda, were proud of where they came from and expected their children to be proud of their heritage too. However, being black in Africa is something to be proud of but being black in America is an entirely different struggle.

Dr. King was born in 1929 into a family who loved Christ and took the time to love those around them, but America during the 50s and 60s was less than kind when it came to African Americans. He lived in a world where anyone of dark skin had to sit in the back of the bus, use a separate bathroom, children attended rundown schools with outdated textbooks, and being treated fair was only in your dreams.

After getting his doctorate in systematic theology, God not only led Dr. King to be a pastor, husband, and father, but also a protest leader and spokesman for African Americans. A leader in the Civil Rights Movement, he labored tirelessly for African Americans to have their dreams heard in hopes that they would soon be a reality. With much popularity came consequences for him; such as death threats, firebombs were thrown into his home, time in jail, and eventually, his assassination in Memphis, Tennessee in 1968.

Throughout all of this Dr. King was scared, but one evening he heard the voice of Jesus telling him to stand for justice and he continued to power through with courage and love. Despite the hatred he was given, he always came in peace and often said, “We still have the attitude of love”. No matter how he was treated, he came in peace and nonviolence. Outside of his famous “I Have a Dream” speech, he was known for the most peaceful boycotts and marches when it came to protesting about social injustice.

Though public places are no longer segregated due to laws, African Americans continue to feel a weight of not being worthy or capable just because of the color of their skin. Laws are useful and they keep things in “order”, but there has to be a heart change as well. Growing up I often heard things like: “Don’t listen to rap music, keep your hair straight, speak well, keep your hands out of your pockets, and don’t raise your voice or else they’ll think you’re that crazy black woman.” It’s exhausting fitting into a world that doesn’t like you for who you are. I sometimes find myself saying, “If only I wasn’t black how much easier this would be.” Dr. King truly felt the love of God in his own life but had a dream that everyone extend this same love to others. The dream to be known, sought after, cared for and valued is something we all want. Through Jesus this is possible, but has not yet happened here on earth.

Often cries in anger are deep cries underneath. No one is born hating people for what they look like, it’s taught. I want to teach people how to love others for the deep cries they have. I want anger not to scare us, but give us the courage to ask, “Why do you feel this way?”. I’m still learning how to have honest conversations about what it looks like to move forward as a people of God and how to share the wounds I swore I’d never talk about.

In the words of Dr. King “Darkness cannot drive out darkness; only light can do that. Hate cannot drive out hate; only love can do that.” Love is showing up and being vulnerable, which might come in a form of a march. Love is also listening and learning how to be a better friend while loving people for who they are. Sometimes the best love you can give someone is to listen and process with them. If they aren’t ready to discuss these topics, don’t push. People don’t forget those who have loved them and waited patiently. Change first must begin in the heart and then it overflows into our lives. I pray we all get a chance to show these different aspects of Jesus. I pray we get to feel love and show love at the same time.