Skip to content
Interview with Lena from the Congo 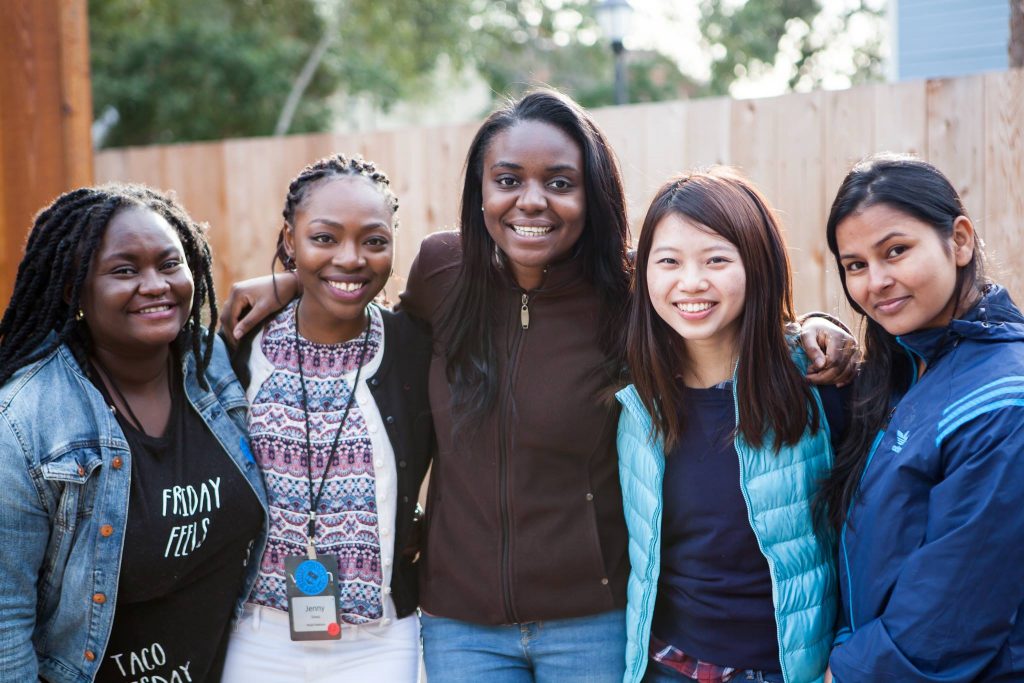 This week on the Bridges Blog we wanted to get to you know, our reader, a little bit more. So we’ve started by interviewing students involved with Bridges around the US. Here is our first interview post.

Introduce yourself. What is your first name, what is your major, what is your school, where are you from?
My name is Lena Musoka. (Lena is in the center of the above photo.) I study at the University of Houston and I am majoring in Public Health. I am from the Congo (Kinshasa) and came to the U.S about 3 years ago.

What was your first impression of the USA?
The first impression that I had of the U.S. was definitely that everything was so big. My mother, my friend Josee who also came for studies, and I first arrived in Atlanta, where we had a connecting flight to Orlando. The airport was very big; I remember walking a long distance before getting to our gate. When we arrived in Orlando, I thought, “Wow, the weather is perfect.” Going to a foreign country to study is an experience that brings up a lot of anxieties, and for me, one of them was the weather. I had known warm weather for my whole life, I was not sure that I was ready to live in a place where the weather would be cold. But there we were, it was summertime and the weather was warm and humid, I felt very welcomed.

Something that really surprised me in a pleasing way was the diversity. In just one day, I could hear people speak so many different languages! When I started the ESL program, I met people from countries that I had never imagined I would meet a citizen from. I remember being very excited when meeting a girl who came from Sri Lanka and she could not believe that she had just met someone from Congo.

What is the biggest difference you have noticed between your culture and American culture?
One of the biggest differences between my culture and the American culture is regarding dressing. In Congo, the way you dress is such a big deal! We even have a group of people called “sapeurs”, whose lives are centered on clothes, dressing in an extravagant way, buying expensive clothes, and showing off in the streets. It is not just that these people love dressing nicely, they almost worship their clothes! Now, I am not saying that people here do not value dressing up but people in the U.S are just cool. It is ok if you are dressed up and it is also ok if you are not. I remember being very surprised when some of my classmates showed up to class wearing their pajamas. Later on, I started thinking, “yeah, what’s the big deal? Showing up to class is what really matters.” Even though I truly believed that I would have never thought that way when I was in Congo.

What advice would you give to an international student who is coming to the USA for the first time?
I would tell international students not to worry. It can be stressful to go study in a foreign country but when I arrived here, people were willing to help me make this experience so much less stressful. For instance, when I had troubles communicating because of language barriers, most people were patient and kind.

Has being involved in Bridges helped you? How?
In Bridges International, I felt like my culture is embraced because of the way the Bridges family welcomes people from different backgrounds and encourages them to share about their cultures. Also, Bridges International has helped me hold on to the things that I did not want to lose when coming to the U.S. I am a Christian and wanted to continue pursuing a relationship with God. I remember some pastors and relatives back home telling me “Please, don’t lose your faith”, “Be careful, you are going to face greater temptations” These words were not really comforting. But I remember being so thankful when I met people from Bridges who were embracing my culture and also cheering me on spiritually. Having such a community to rely on is one of the most amazing things when moving to another country.